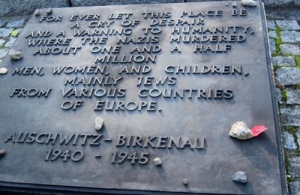 Members of the public are invited to remember the millions of victims of genocide at a Holocaust Memorial Day event in West Bromwich this weekend. The service will be at Highfields Memorial Gardens, off High Street, West Bromwich, on Sunday 27 January.

The commemoration will include a speech by Lia Lesser. She was among the 699 children saved from Czechoslovakia as part of the Kindertransport initiative organised by Nicholas Winton in the final months before the war began. Nicholas was later awarded the MBE and knighted for his humanitarian work.

The Mayor of Sandwell Councillor Joy Edis said: “Everyone is invited to join us to remember the millions of victims of genocide the world has sadly seen over the years.

“It’s not only important for us to remember the atrocities of the Holocaust, but for us also to ensure that such horrifying tragedies are not a part of our future.

“The commemoration will remember both the victims of genocide, but also people who live with the terrible memories of what happened to their families.”

Anyone who wishes to attend should arrive at 10.15am for a 10.30am prompt start. Everyone is welcome.