Where next for Bentley? 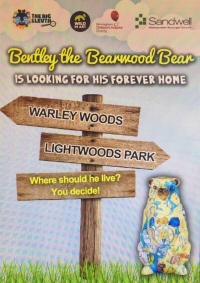 At the conclusion of The Big Sleuth this month the majority of bears will be auctioned off to raise vital funds to assist Birmingham Children’s Hospital. The auction for the previous Owl Trail raised over half a million pounds.

But some bears will be retained in their neighbourhoods…including our very own Bentley, the Bearwood Bear.

However…Bentley is far too heavy for his current site by the water fountain in Warley Woods, and is in serious danger of sinking, so a new site has to be found.

But where should it be located? Somewhere else in Warley Woods, a natural home for a bear? Outside the newly refurbished Lightwoods House in the park? By the bus station where the other bear currently resides?

You can have your say here…or if you have other suggestions, post them in the comments box on here.

1 Response to Where next for Bentley?