This will be good news… 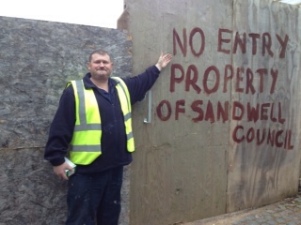 …for residents of Barclay Road and parts of Galton Road!

At midnight last night Sandwell Council took possession of the land on Barclay Road which has been the subject of a Compulsory Purchase Order (CPO).

As you may know this property has been derelict and a blight on the area for years, and made the national news a couple of months ago when a building worker was hospitalised after he became trapped when the land he was working on collapsed around him.

The Council was granted the CPO in January by the Planning Inspectorate when the owner of the land failed to make a convincing case that he should be allowed to continue to develop the site, despite him doing very little 'development' over the years.

He has appealed the Planning Inspectorate decision to the High Court, and a number of residents have written letters to the court supporting the CPO decision, but the council have taken over the land.

A senior housing officer told the Bearwood Blog, “The owner was refusing us access to try to make the property and the site safer, and we have therefore taken possession of the land and will be making it safe and secure.”

Councillor Bob Piper said, “All the neighbouring residents want is for an end to this mess and for the site to be properly developed into residential housing. Hopefully when the legal wrangling has finished the council will be in a position to ensure that happens as soon as possible. Two residents have been forced to move out of their homes bordering on to this site, a workman was seriously injured and was lucky to escape with his life, and the rest of us have had to suffer this disgrace of a site for well over 10 years.”

4 Responses to This will be good news…