The Brook in full flow 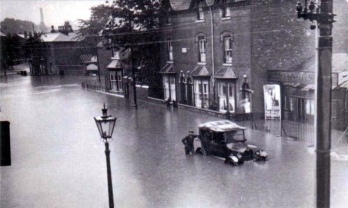 Thimblemill Brook is one of our three green spaces here in Bearwood, a positive haven of urban wildlife and fauna… but it is also playing another key environmental role.The floods down South and in the West Country have obviously been devastating for whole communities. But in the past Smethwick has had quite a long history of flooding, and the picture here shows flooding down by Smethwick Council House in 1927 when the Thimblemill Brook which runs past Norman Road into Smethwick burst it's banks. The are flooded badly again in 1931 following flash storms.

The Brook was subsequently damned in 1932 to create a series of pools to control the flow of water passing through to Smethwick, and despite the amount of rain we have experienced over the last month or so, the Brook has held up well. Thanks to Moira Black from the Friends of Thimblemill Brook has sent these pictures of the Brook doing it's job as one reservoir fills, and another showing it flowing freely.

4 Responses to The Brook in full flow