We have been advised that the A38 tunnels through Birmingham city centre are going to be closed for six weeks this summer while essential refurbishment is carried out. 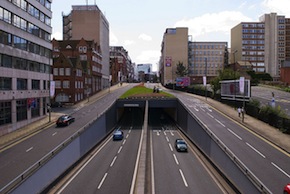 The St Chad’s and Queensway tunnels will be completely closed to all traffic from 19 July to 2 September. The closure will be preceded by four weeks of overnight closures, from 10pm to 6am, and followed by up to two weeks of similar overnight closures.

People who work in the city centre or who visit Birmingham are being urged to consider how they travel during the six week closure period, with train, bus and cycling all being viable alternatives to driving.

During the closure of the 40-year-old tunnels, work will be undertaken involving structural modifications, upgrading fire protection, and improving the lighting and general appearance.  Further refurbishment works including new emergency, control and communications systems are being planned for next year.

Councillor Tahir Ali, the City Council’s cabinet member for development, jobs and skills, said: “I would urge everyone who regularly drives into the city centre, particularly at peak times, to consider alternatives. Although the work has been planned for the school holidays when there are fewer vehicles on the roads, it will still have an unavoidable impact. Drivers should consider using public transport, cycling or even walking where it is feasible.

“I would ask motorists to start thinking now about alternative ways of getting into the city centre.”